The Down Side of Breathing

Sound harsh? Well, it's true. Breathing wrong can literally kill you. Of course you won't die of the incorrect breathing itself, instead it will be from the symptoms that accumulate from long periods of poor breathing. Over a lifetime, poor breathing impairs the function of all organs of the human body and can lead to things like asthma, heart disease, diabetes, and even cancer. Here's the connection: Most people actually breathe too much. And the problem is that over breathing causes us to get rid of too much CO2. WHAT? DON'T WE WANT TO GET RID OF CO2?!?

Conventional wisdom does say that CO2 is nothing more than a waste product, but the actual science says otherwise. CO2 has many positive effects on the human body when present in the appropriate amounts.

Among other things, it causes:

To see how these effects add up, consider this comparison. The healthy person at rest breathes 5 liters of air per minute and has a CO2 concentration of about 6% in his blood. In contrast, the average heart disease patient breathes 15 liters of air per minute at rest and has 4% CO2 blood concentration. Decreased CO2 correlates very strongly with heart disease, and similar relationships exist between CO2 and numerous other modern diseases.

So, how can you raise your CO2 levels to reap the health benefits mentioned above? The first and most impactful tip I recommend is to exclusively nasal breathe during exercise. That means literally no mouth breathing whatsoever. At first you may have to tape your mouth shut during exercise or hold a sip of water or vegetable oil (olive oil, canola, grapeseed, etc.) in your mouth to ensure that it stays closed.

Mouth breathing has numerous damaging effects, including blowing off too much CO2 on the exhale and bypassing the nose's air filtering mechanisms on the inhale. It also stimulates your stress response (sympathetic nervous system). If you're used to mouth breathing during exercise, you may notice increased difficulty in training and reduction in your stamina as you start to use new breathing muscles. This, however, will pass. And ultimately you will reach higher levels of performance when breathing through your nose than through your mouth.

For those who are interested, here are some references.

And for breathing parameters in sick people:

Another great resource is John Douillard's book, Body, Mind, and Sport. Chapter 10 in particular focuses on the mechanics of breathing during exercise.

And more excellent breathing information can be found at www.normalbreathing.com.

Healing after ChildBirth with NeuFit

Lessons from Our Cells

Can you get strong with the Neubie?

Doing it for your own good

Inactive muscles? It's all in your head 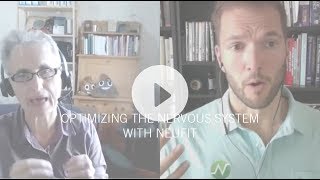 Is It Mobility or Flexibility?